Wow! Skipping a day of posting in early December turned into a week, which turned into more until it has been almost a month. What a slippery slope!

And it's not that I don't have anything to post. I have quite a few new things to show off since I've last posted. But time management has come into play the past 4-6 weeks. Some of you might remember from last year, both of my sons wrestle in the winter. Now that the older one is a freshman and the younger in 7th grade, they have different times and locations for practices and meets. That makes for a pretty hectic schedule in my household to go along with my full-time job and some night classes thrown in.

But I wanted to sneak one more post in before the end of the year and let everyone know that I'll be back to regular posting very shortly. I've got a bunch of stuff scanned, a few half-posts to finish up and then 2014 card releases are right around the corner!

Speaking of which, I've also signed up for my second blog that will focus on the 2014 Topps flagship set. Each post will feature a different card from the set and break it down. I'm still figuring out a few logistics but it will be live in about two weeks with a welcome post and then updated very regularly once the set is released. I hope to see you there!

Happy New Year, everybody! Please celebrate responsibly so I can enjoy your blogs in 2014!
Posted by Once a Cub at 3:12 PM 1 comment:

Another Wednesday means another Hump Day Hit. I hope to keep this theme up throughout the offseason at least. To me, and for the purpose of this theme, a hit could be a relic, autograph or a fairly low numbered serial card. In some cases it may be all three!


Last week, I went with a relic of a no doubt about it, first ballot Hall of Famer. Today, let's go in the opposite direction with an autograph of an unproven youngster. 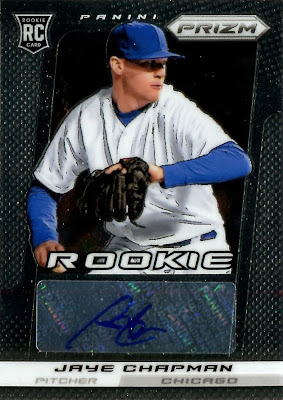 Those of you familiar with Panini Prizm's product knows this card is actually a shiny, lighter silver. Unfortunately, my scanner doesn't seem to think so.

As for the player, Jaye Chapman was acquired by the Cubs during the 2012 season in a trade with the Atlanta Braves. The Cubs sent Reed Johnson and Paul Maholm to the Braves for Chapman and Arodys Vizcaino.

He made his major league debut in September of that year and ended up pitching in 14 games by the end of the year. He was granted free agency following the season but re-signed with the Cubs for 2013. He spent this past year entirely in Iowa, although he only made four appearances. I'll have to look deeper but it appears he was injured. He was granted free agency again early last month so we'll see where he ends up in 2014. 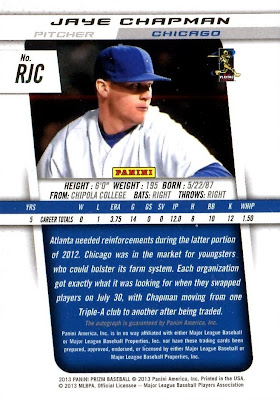 I picked this card up a few weeks ago with a Just Commons order for just $2 and hit the $10 mark with my total purchase for free shipping. Not too bad, even if it is unlicensed.
Posted by Once a Cub at 12:00 PM No comments:

A few weeks ago, I did my my brief writeup on Nate Schierholtz because I got my ATCRCS card signed. But today I have the breakdown of his 2013 Topps Series 2 card. 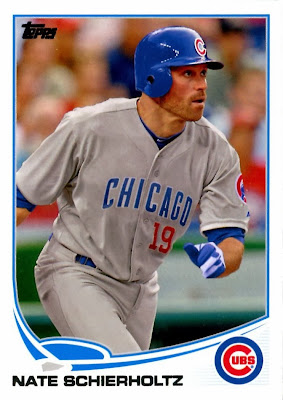 The zoom Topps has used recently has been discussed around the blogosphere and I'm ok with it, within reason. In general, I'm not a fan of cropping off appendages. Well, arms anyway. The bottom crop on this card is acceptable. But hacking off Schierholtz's right arm is not.

Let's take a look at the source photo to see what's going on.
﻿﻿
﻿﻿ ﻿﻿ ﻿Gasp! It's worse than I thought! Phillie red everywhere!!! Just kidding. With the turnover the Cubs have had in recent seasons, it's perfectly logical that Topps was going to have to photoshop some players into Cubbie blue. I'm no expert on the Cubs uniforms but I probably wouldn't have even done a double take if I wasn't taking a closer look at these cards. And knowing he was an offseason pickup and Topps wouldn't have had time to get him in a Cubs uniform, even for Series 2.

But back to the arm. I'll concede that zooming out to include the arm probably wouldn't have looked better. It might be a little nitpicky, but that being the case, I probably would have chosen a different photo.

The caption on the Getty website goes so far as to tell me that this is a single in the third inning against the Nationals on August 1, 2012. Since this was a Phillies game, I'm not even going bother doing any further research.

Ok, I lied. I was bored. Schierholtz ended up stranded on third but ended the day going 2-5. His other hit was a 5th inning home run solo home run that ended up being the game winning run in a 3-2 victory over the Nats. Prior to the single, Jimmy Rollins hit a solo home run. Also prior to Schierholtz's home run, Rollins led off the 5th with his second home run of the game. Three Phillies runs, three solo home runs. 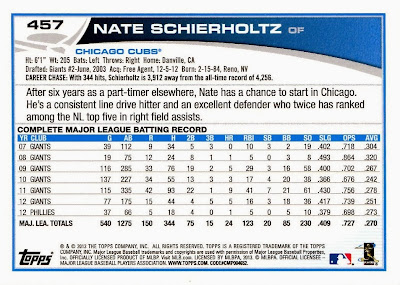 The back of the card is pretty standard. i did find it interesting that Schierholtz was both a "part-timer elsewhere" and also managed to be among the "NL top five in right field assists" twice. I'll also take it as a not-so-subtle dig that he can start for the Cubs but was a part-timer elsewhere for six years. Ugh.
Posted by Once a Cub at 12:00 PM 1 comment:

Glenallen Hill had two stints with the Cubs back in the 1990's. His first began late in 1993 after the Cleveland Indians traded him for Candy Maldonado. He spent 1994 as the fourth outfielder behind Derrick May, Tuffy Rhodes and Sammy Sosa.﻿

The highlight of that tenure was a 2-3 performance in 5 plate appearances on June 18, 1994. Hill hit a three run home run in the top of the first inning to jumpstart the the Cubs offense against the San Francisco Giants. He would walk twice before coming up in the top of the 9th with the score tied 4-4. Hill's two run double gave the Cubs the lead and the win as Randy Myers came on in the bottom half to get the save.

Although, you may be able to argue that just 11 days later when Hill hit a walk-off bases loaded double with the Cubs down 5-4 against the Pittsburgh Pirates would be a bigger highlight.

He was granted free agency following the season and spent some time in San Francisco and Seattle before rejoining the Cubs midway through the 1998 season. Again, in this stint, Hill was a fourth outfielder. In the Cubs losing effort against the Atlanta Braves in the NLDS that season, Hill went 1-3 with a stolen base and walk.

Hill has been coaching in the Colorado Rockies system since 2003 and is currently the manager of their Triple-A affiliate, the Colorado Springs Sky Sox. The ATCRCS card above was signed when the Sky Sox traveled to Tacoma to play the Rainiers this past summer.
Posted by Once a Cub at 12:00 PM 2 comments: