Last week, I talked about streamlining my two niche collections into Frankensets. As far as organization goes, the Ivy Collection seemed liked the easier of the two to tackle so during the masterful performance by Jake Arrieta in front of a national audience on Sunday evening, I was a scanning, cropping and cataloging machine.

While I know I still have a couple dozen, if not a hundred, more Ivy cards tucked away somewhere, I was able to get a good start towards my set. I still owe some people stuff from before my hiatus, so I won't be putting out a wantlist, or even my checklist until I get caught up with the outgoing mail. But thanks for the offers I've received already, they're appreciated!

In the meantime, I am a bit of a spreadsheet/statistics geek so I thought I'd share a few tidbits about the collection.

To start, I have cataloged 181 cards that feature the ivy of Wrigley Field in the background. No Cubs cards will be included in this set, although Cubs players can (and do) make cameos. National League teams will have an advantage but I will try to find as many American League teams as I can. As of this cataloging, the AL collection includes one card from the White Sox and one from the Orioles. The Houston Astros are the overall team leader with 23 cards, but they are all from their NL days. Likewise, the one Milwaukee Brewers card I have set aside from this collection is from their AL days.

The majority of the cards so far are from the junk wax era. The oldest card so far is from 1981 Donruss. The newest card is from 2014 Donruss. I don't have many 2015 cards and what I do are predominantly Cubs. And the way this Frankenset was culled together, many sets are over represented here in the beginning. I hope to diversify as much as possible, but a few of these sets had multiple nice cards.

Pitchers take the cake for the position tally with a count of 109. I was quite surprised to find cards with a catcher and a DH with ivy in the background.

The lowest card number was 1 and the highest in this small sample was 817. I'm not sure my set will go that high, but I'll try to fill as many holes as I can.

I know, I know. Enough with the numbers, show you some pictures. Of the 181 cards, 19 cards numbers were duplicated and one was triplicated. So let's duke it out and pit a few against each other to see who makes the set. Comment below to let me know which one you think should make the set. I'll say a few things about each one and why they interest me (or don't). 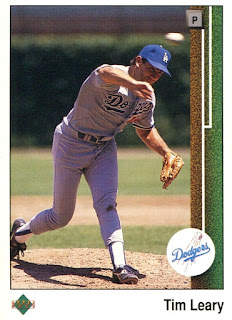 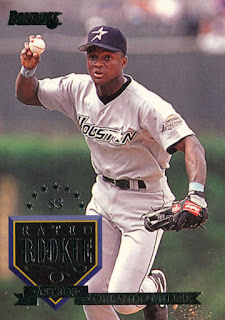 Tale of the tape: The 1989 Upper Deck set is represented 4 times, while the 1995 Donruss set has 7 cards. The Dodgers have 18 cards. The Astros have 23. Leary is one of 109 pitchers while Miller is one of only 19 shortstops. The player photography is probably better on the Miller card, who is also a Rated Rookie, but the ivy is clearer on the Leary card. 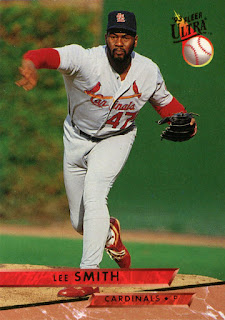 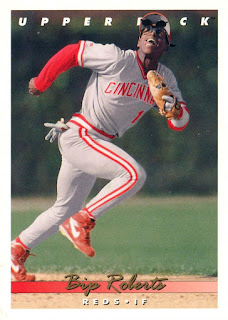 Tale of the Tape: In one corner, we have a Hall of Fame-worthy former Cub. In the other, we have a blogosphere fan favorite with some flipped up shades. This is Fleer Ultra's lone representative so far while the 1993 Upper Deck set has seven cards on my spreadsheet. That 1993 Upper Deck set is one of the ones I mentioned earlier that has some great shots, in and out of Wrigley. Both are NL Central rivals so that's a strike against both. Lee Smith falls into the overused pitcher category, while Bip Roberts is one of eight in the collection with the infield designation.

And for our final matchup of the day, we have the Battle of #170 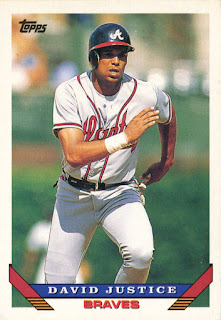 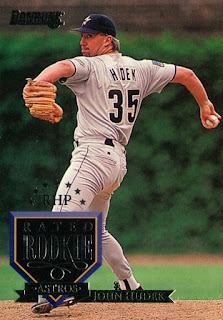 Tale of the Tape: Like the first matchup, we have a similar set count of 4 vs. 7. And the 1995 Donruss card is another Rated Rookie Astros player. The Braves have 13 cards so far, compared with the Astros leading 23. David Justice is credited as an outfielder on the back of the card, one of 19 represented. I do have a soft spot for seeing nameplates and jersey numbers like the John Hudek card, but personally, I think Justice wins this matchup.

Let me know what you think. I'll post winners next Friday and come up with some more battles. The losers will stay in the collection, they just won't get the binder treatment.

Email ThisBlogThis!Share to TwitterShare to FacebookShare to Pinterest
Labels: Frankenset, The Ivy Collection

In this new series, I’m going to be showing off some of my minor league team set pickups. I was going to present the team set with minimal comments but thought it would be fun to talk about whether any of these players from the set had “made it” yet. 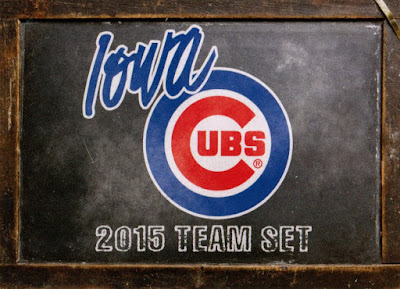 There was a checklist card but to build a little suspense, I'll save the back for the last post in this series. The coaching staff makes up the first couple of cards and I think I’ve got a full post just on these guys. So I’ll spread this out a bit. 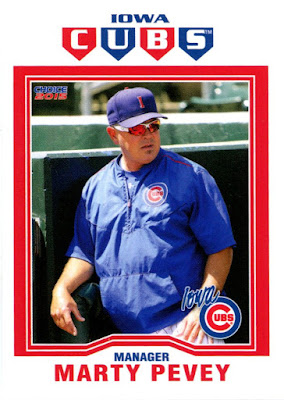 Manager Marty Pevey played 13 career games for the Montreal Expos in 1990. One of those games was against the Cubs, but alas, not at Wrigley. 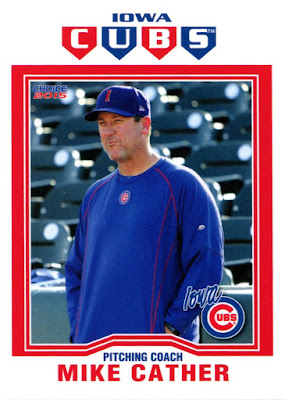 Pitching Coach Mike Cather pitched part of three seasons with the Atlanta Braves from 1997-99. He made 6 career appearances against the Cubs, the first of which was his only appearance at Wrigley Field. The result? Cather’s first Major League loss. After getting the final out of the 7th inning, check out the sequence of events. 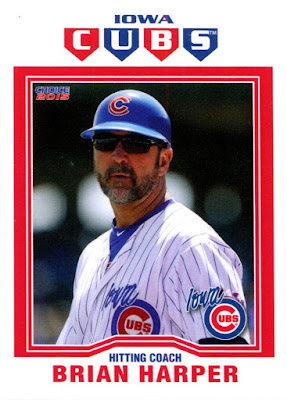 Hitting Coach Brian Harper played from 1979-1995. His Wrigley debut came on September 20, 1982 as a member of the Pittsburgh Pirates. I’m a little confused by the boxscore on Baseball-reference…

Does that mean he was announced as a pinch hitter, the Cubs brought in a new pitcher and then the Pirates pulled Harper back for Dave Parker? Anyone?

Anyway, the next night, Harper struck out in a pinch hit appearance at Wrigley for an actual debut. 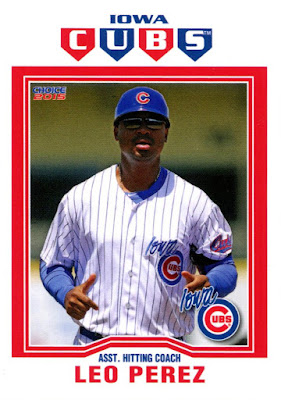 Assistant Hitting Coach Leo Perez is the first coach to have actually been a Cub at some point in his playing days. Well, a minor league Cub, making it as high as Advanced Single A Daytona. It looks like he may have been a catcher, but also tried his hand at pitching in a couple of game in the Arizona Fall League. 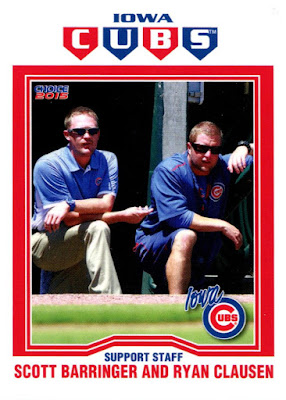 Finishing up the field staff is a dual card of Athletic Trainer Scott Baringer and Strength & Conditioning Coach Ryan Clausen. While its probably cool for these guys to have a baseball card, I’m not sure I see the point? Both had also previously worked together with the Cubs Double A organization, the Tennessee Smokies. Which means if the Smokies did the same thing, I might have multiple cards of these guys. I can't remember from when I scanned them.

The last card in the set is #36, Cubbie Bear, the mascot of the Iowa Cubs. 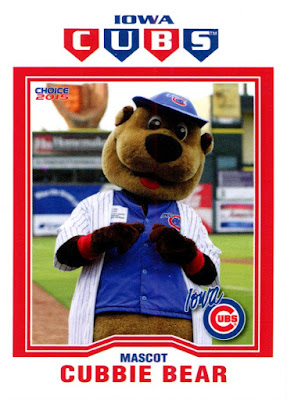