So apparently when I made my parade recap post on Saturday, my videos loaded as pictures. Now that I've rested up a bit, I took the time to redo them and add them here. Again, apologies for some of the camerawork but there was some jostling and screaming among the couple of fans who showed up.

Final video, several buses at once. Arrieta, Schwarber, Montgomery and La Stella in first bus. Russell, Hendricks, Cahill, Edwards and Grimm (& someone next to him) in second bus. Bryant, Heyward, Fowler and Rizzo in third bus. And the final bus in Lackey, Ross, Travis Wood, Ross and World Series trophy:

It's been a while since I last posted, no? What a fitting previous post though with a breakdown of Kyle Hendricks' Topps card. Several times during the post season run I thought about posting but couldn't think of anything to say other than exclaim how exciting everything was. And frustrating. And exciting again! And frustrating again. And then an unbelievable Game 7! Exhausting!

And if I wasn't tired enough, my older son convinced me to drive from Virginia to Chicago for the parade on Friday. At 7 PM Thursday night. We were on the road within an hour and drove through the night. We took toll roads that shaved about 90 minutes off the trip and gaining an hour switching to Central Time helped as well.

Thank goodness for smart phones. As spontaneous as this trip was, we were able to do a little planning on the way. We prepaid for parking about a mile and half from the park where the parade was to end and the rally was to be held so we had a guaranteed spot when we rolled up just before 6 AM local time. At this point it was still dark out and we were exhausted so we set some alarms and took a quick hour nap in the car. We didn't think we had any chance of being near the front anyway so might as well sleep some of the funk away.

I grew a WGN Cubs fan (military brat) and am not a Chicago native so I don't know my way around the city at all. It took a half mile before we saw anybody else in Cubs gear. I was starting to get nervous we weren't anywhere near where we needed to be. But the closer we got, the bluer it got. 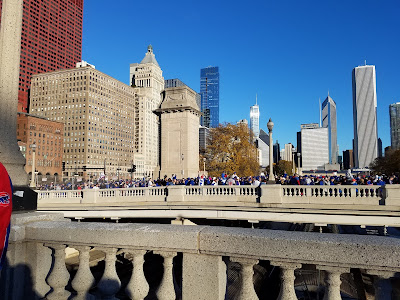 There were several of these bridges full of Cubs fans waiting to get into the park. There was a bag check area we were funneled into which bottle-necked things a bit but it really wasn't too bad considering the volume. 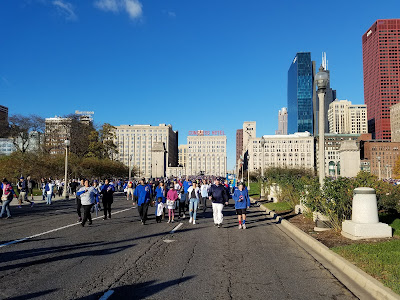 After we cleared the bridge, I turned around to take a quick photo of the crowd following us. At this point, we had to decide whether to head for the area where the rally was being held or find a post along the parade route. Soooo many people were headed for the rally and we found a great spot for the parade (we hoped). 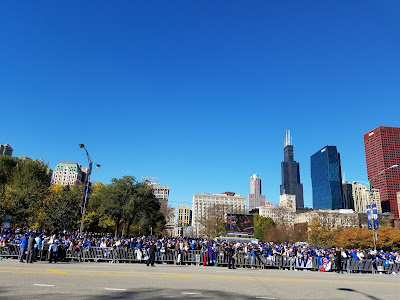 This was my view for the next couple of hours while we waited for the parade to start. There was a giant TV across the way broadcasting a local news program that was showing everything that was going on at Wrigley Field so that was entertaining at least. Several times over that span, small groups attempted to climb the trailer that held the TV but they were booed off by the crowd (it messed with the TV and scrambled the signal). In my experience, the police were very present but I did not not see any altercations.

There were a couple of ladies in front of us along the fence but none above 5 feet tall so it did end up being perfect! By the time the parade started, the crowd was easily 25-30 deep behind us.

There were a bunch of trolleys that came through but I have no idea who was on them. Speculation among the crowd around us was they were Cubs employees and/or sponsors. I did take some videos but I didn't see anything worth posting.

Next up were the Budweiser Clydesdale horse, with dalmatian. At any other parade, I would have been more impressed. But bring on the Cubs! Haha 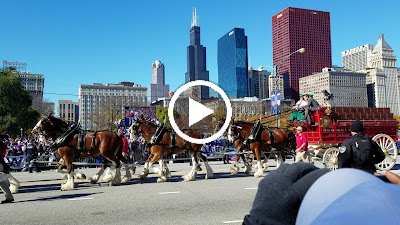 This was the first time I had ever seen Clark, the fairly new mascot in real life. I never caught a glimpse of him at Wrigley. As you can see in the video, he clearly pointed directly at me and made my day. 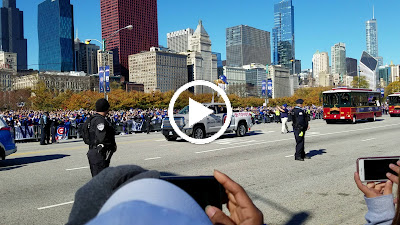 A few more trolleys and then a giant replica World Series trophy in the back of a pickup. 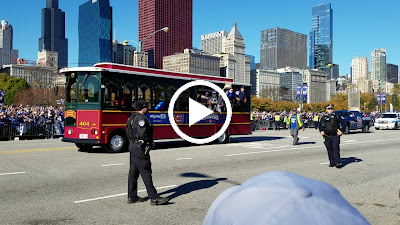 Some mounted police before the double decker buses appeared. 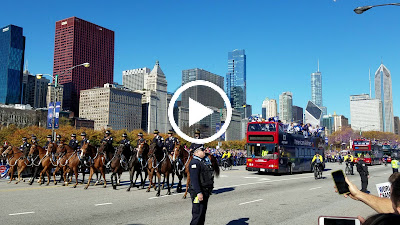 I couldn't make out anybody on that first bus, but the second one was lead by the face of the ownership group, Tom Ricketts. 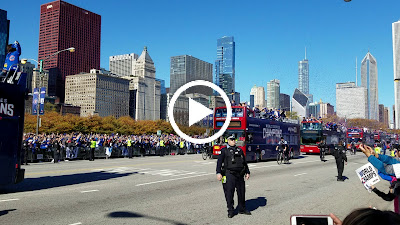 The next bus featured two Hall of Fame alumni. As you can tell from the shouting, Ryne Sandberg was recognized first but Billy Williams was there too. 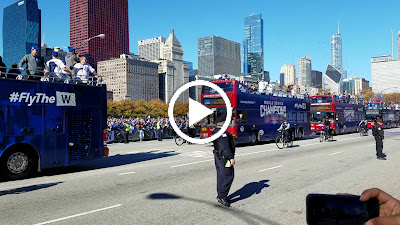 There was another bus without anybody recognizable from my video but then the bus after that had the executives. Theo got some big cheers! 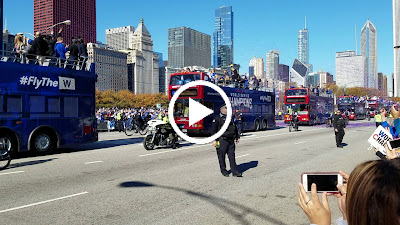 Followed by the coaches: 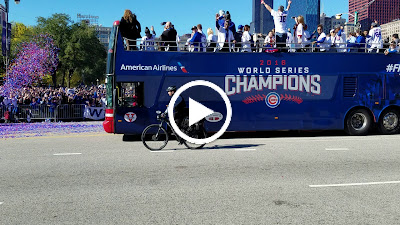 And finally some players: 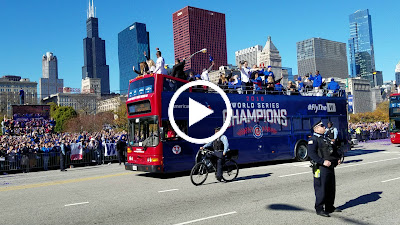 Jorge Soler in the front, Albert Almora in the middle and a very brief glimpse of Willson Contreras in the back.

At this point, I was lost in enjoying the moment (as I should have been) and the video quality got way worse. I did manage a few decent photos as the other buses past. 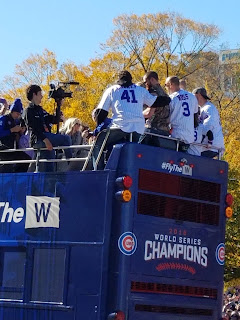 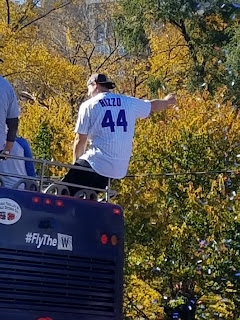 After the parade, we didn't even try to get near the rally. But all around the park were more of those large TVs (jumbotrons?) and we were able to relax and watch the rally from there. 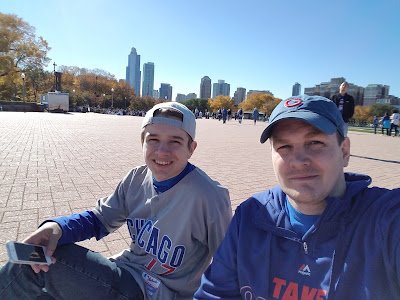 We walked around a little after that and were back to our car and on our way back home by 4 PM. There was a little traffic on the way out of town (shocker I know) but not too bad considering. We drove to Merrillville, IN, where we stayed on our recent road trip, had dinner, and drove the rest of the way home. We rolled back into Fairfax, VA at 6:30 AM Saturday morning. What a whirlwind 36 hours!

I took a nap, read some recaps of the events (5 million people?!?) and decided to make this post so I had it for posterity.

Time to defend the title!

How long until pitchers and catchers report??