Archives by the Numbers - Part 2

Don't forget to vote in the poll to the right regarding the next break. Go ahead, I'll wait...


Ok, now that everything's packaged up I thought I'd throw one last Archives post out there. This one will break down the team distributions so everyone will kind of get a glimpse of what their package will entail. Obviously with a set like Archives, some fared better than others. 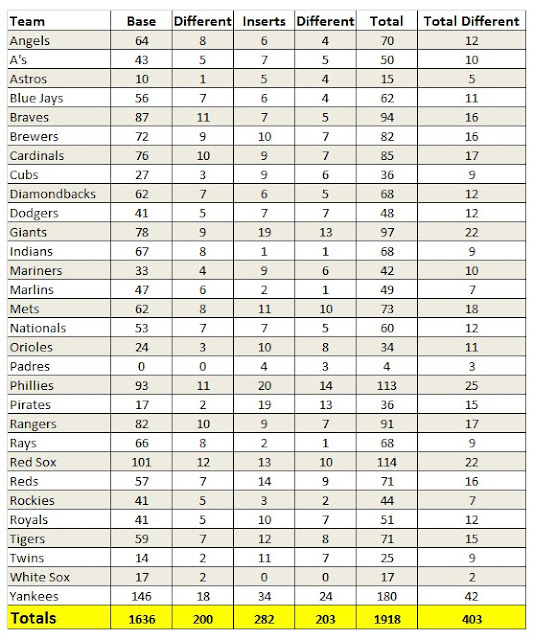 A few things I noticed.

I debated on posting the following information. It will probably disappoint some but others may feel like they got a got deal. Thems the breaks of a break, I guess. The chart below reflects each teams total distribution, regardless of whether the card was an insert or a base card. The column labeled "% Distrib." is the total number of cards pulled from that team divided by 1918 (total number of cards pulled). So as you can see, the Yankees represented 9.385% of the cards in the box. The third column is that percentage multiplied by what I paid for the case plus an average of $3.00 shipping and insurance. So, in theory, hindsight being 20/20, this columns represents the amount I should have charged per team, assuming every card had an equal value.

Keep in mind, this does not account for an increase in value for things like the Castro printing plate, Gallardo jersey card or any of the autographs. These are straight, every card has the same value figures. You'll see the Pirates towards the bottom of this list and if you remember, I pulled 3 autographs and a total of 19 inserts vs 17 base cards for them.

One of the things I love about numbers is that they are cold hard facts, yet can be manipulated to be what you'd like to see. In my case, I'd like everyone to feel they got their money's worth!