I've been adding team issued baseball card sets for all of the Cubs minor league affiliates the last couple of years. It's been a while since I did a post on them, definitely not since I've been back from my blogging hiatus.

I meant to do a few when I received the 2017 team sets for all of the Cubs affiliates, but scanning and cropping 150+ cards was a little daunting at the time and got put on the back burner once all the 2018 cards started coming out. Thanks again to P-Town Tom for helping to coordinate that acquisition when he went to the Cubs convention in January!

I recently found the scanned-but-uncropped images from these sets in a folder on my desktop. At the same time, the Cubs made some roster moves and after taking a look through the folder, I figured I'd get some of these posted. I made some progress on cropping and naming while watching these guys play this weekend so we'll start with them. 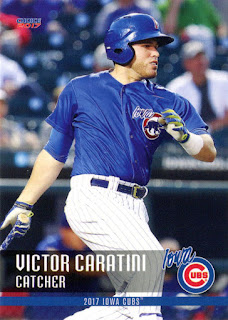 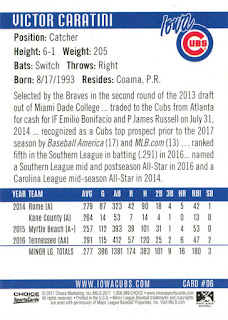 I like the design of the 2017 Iowa Cubs team set. Simple, but still attractive. The photography is not as crisp as the stuff Topps gets from Getty Images but still pretty good.

Victor Caratini﻿ was a little bit of a surprise 25th man to make the roster coming out of Spring Training this year. There was a lot of speculation that Chris Gimenez, a catcher with Yu Darvish experience, would snag the last spot. Caratini though has proven valuable off the bench and when spelling Willson Contreras behind the plate. He has also filled in at first base, including a stretch of games when Anthony Rizzo was sidelined with a back injury a few weeks ago.

Just last night he plated the tying and game winning runs in a comeback victory over the Marlins. 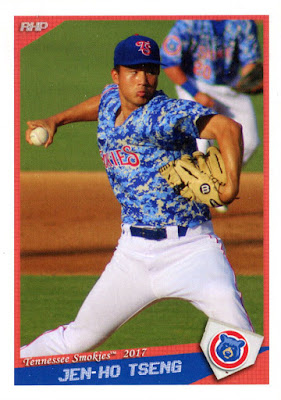 Part of the reason the Cubs needed to come from behind was a bit of a rough start from Jen-Ho Tseng, who made a last minute spot start for an under the weather Yu Darvish. Actually, the start was pretty good, as he got the first two outs on a 3-pitch strikeout and a 1-pitch﻿ groundout. Then four straight hits (including a single by former Cub Starlin Castro and homerun by former Cubs minor leaguer Justin Bour) landed the Cubs in a 3-0 hole.

Tseng regrouped in the second inning with two more strikeouts and another groundball to finish his day. Luckily, the Cubs got 8 innings out of the Kyle Hendricks the night before in the 14-2 blowout win so the bullpen was rested. They managed to shut down the Marlins the rest of the way. 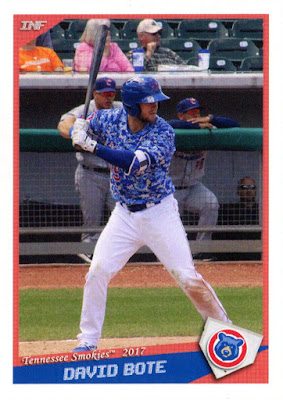 David Bote pinch hit for Tseng in the bottom of the second. While Caratini drove in the first two runs of the game, Bote put the Cubs back in the game intially, driving in two runs with a two-out double. ﻿It was his second Major League hit but his first two RBIs.

One of the things I don't like about minor league cards is that many of them don't have any kind of numbering system. Sure, I guess you could use the jerseys numbers, which the Smokies set has on the back, but then you have gaps in the numbering as not every number is used.﻿
Posted by Once a Cub at 12:00 PM