As I've been sorting and scanning cards, I realized I have a bunch more relics and autographs (your typical cards considered the "hits" of the pack). I love me some alliteration so to help get through Wednesdays of the offseason, I've come up with Hump Day Hits where I'll show off a random hit from my collection.

A few weeks ago, an eBay seller was clearing out their Chicago sports collection that included dozens of relics and autographs from the Cubs, Bulls, and Bears. Some of the listings had Buy It Now prices but many more started at just $.99. I think I did pretty well, picking up 24 new pieces for just about a buck and a half apiece after shipping.

For some reason the Hall of Fame ballot for 2014 was "released" yesterday. Maybe I'm a bit more computer savvy but I thought this information was widely available on Baseball-Reference and even the Hall of Fame website for years. I'll tie this together by starting this new theme off with a big name from the list. 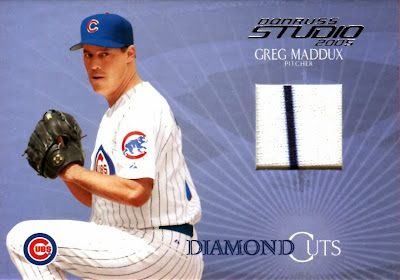 In 2005, Greg Maddux was in the midst of his second stint with the Cubs and had already more or less cemented his Hall of Fame status. I haven't known the Braves to wear pinstripes so I can reasonably assume this is at least from a Cubs uniform. In fact, I'll willing to believe that this is from the actual jersey that Maddux wore in 2004 when he secured his 300 career victory. Ok, probably not. 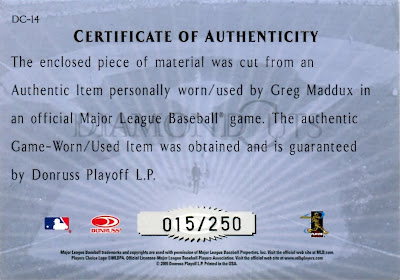 I never really thought about how many swatches a company could manage to get from a game used jersey. This card is numbered to 250, which sounds like a lot. Even for a Prince Fielder and Pablo Sandoval jersey. But these squares are probably less than one square inch so I guess it's possible.

Maddux is a shoe-in for the Hall of Fame and I can't think of any reason not to vote for him. He's gotta be as close to unanimous as it gets. Especially to reach the milestones he did that included 10 seasons with the Cubs!
Posted by Once a Cub at 12:00 PM