I pretty much skipped Heritage and have moved on to Opening Day. Sure, I picked up a Cubs team set, but studio photography slapped over fake scenery on a design that I'm not old enough to feel nostalgic about just isn't my thing. Plus, for a concept that is supposed to mimic an old set, Topps sure does seem to mess a lot of stuff up. The best thing about Heritage for me is the card stock.

But I digress. This isn't a bash Heritage post, it is a teaser for my Opening Day case break. 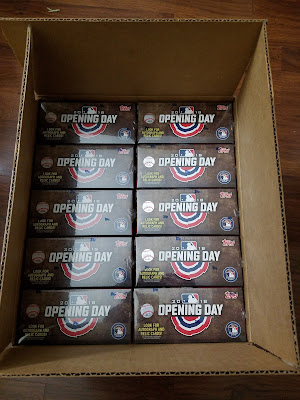 Yesterday, I received an email from UPS that the scheduled delivery time for my case was between 8:30-10:15 AM. Nice! I figured I'd open a box or two (a case has 20 36-pack boxes) and head into work around lunchtime.

But as I tweeted, a watched mailbox never fills. I headed into work around 1PM with nothing delivered and on the drive in, got the alert that the case was delivered. Figures.

I plodded through the rest of the work day and managed to get through two boxes when I got home. The picture above is the only one I'll be showing off today as I didn't take the time to scan anything last night or this morning. But I did want to share a few thoughts on the first two boxes.

Each box has 36 packs with 7 cards, one being a guaranteed insert. So in theory, each box should have roughly 216 base cards and 36 inserts. A full base set is 200 cards so again, in theory, you should be able to get a full base set in each box.

Early on in the first box, I noticed several packs with two inserts. I figured that's how Topps get you. Buy a box, get 99% of a set so you have buy more. But I was pleasantly surprised that when I was done sorting the first box, I did indeed have a complete base set. The second box did as well. Going in, I thought I would end up with about 15-16 sets from my 20 boxes and lots of miscellaneous dupes, but if things hold up, I'll have 20, plus most of the way towards a 21st.

In the first box, I had 209 base cards and 43 inserts. The second box had 210 base cards and 42 inserts. I didn't have a relic hit in either box so I pulled the exact amount of cards as advertised. I haven't compared the odds on each insert yet but at a glance, it looks like I got what I supposed to get for both boxes. The "extra" insert in the first box was a photo parallel. I thought these might be one per box, but I didn't get one in the second box. If I am getting 9-10 base dupes per box, with good collation that 21st set will be real close.

Two boxes in and I think I'm pretty close to attaining the master set that I wanted. A third might do it, again, with good collation. There are a few inserts that won't be completed, even with a case. I was hoping to get close to the photo variations, but if they aren't one per box, I won't be anywhere near as there at least 29 that I've seen.

I've been shutout so far on Stadium Signatures (not autographs, but a set through shows players giving autographs), Dugout Peeks and National Anthem. Luckily, there are only two Cubs between those three checklists so if I don't get too many, not a big loss.

Opening Day Stars are supposed to be a little bit more than one per box and I've pulled three in two boxes. As a 44-card set, I won't get as close as I'd like. We'll see how close I get and then I have to decide if its worth pursuing on the secondary market or through trades.

I noticed when sorting the base set that some of the cards have "changed" since Series 1. Giancarlo Stanton has the same photo but has been photoshopped to make him a Yankee. Jose Quintana, a card I was super collecting from Series 1 because of the photo used, changed photos completely. I'll being taking a closer look at that on the other blog.

Which reminds me, I have followed through on starting a blog for this set. I hope to have a "welcome' post on Sunday and starting showing off cards on Monday. There's nothing there yet, but if you want to get a head start on following, it can be found here. There will more details in the welcome post on Sunday, but I plan to do a bunch of giveaways (what else am I going to do with 20 Opening Day base sets?!?) so I'd recommend it, unbiasedly.

I'll be doing some statistical analysis on Sunday posts, some nerdy stuff, as I'm tracking about 25 different things with this set. I'll feature 4-5 base cards each week, one per day. Four would take me 50 weeks to get through the whole set, wrapping up just in time for next year's set. I'll do inserts on the other days. Again, more details on Sunday.

Here, I'll be doing my Two Random Rynos tomorrow per usual, followed by a 2016 Bunt blaster on Sunday instead of repack. They were my free gifts for ordering my Opening Day case with Dave & Adam's Card World. 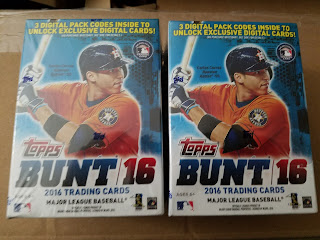 I'll also post a reminder about the new blog starting if you haven't headed over already.