In an interesting turn of events, my first Cubs card of 2018 is a short printed photo variation. I purchased a hanger box on release day and was shut out of my favorite team. I even made the mistake of buying at Target instead of Walmart to get the two guaranteed Kris Bryants.

I bought the box to get it out of my system as I had pre-purchased a team set already. I like the design enough that I will probably buy a complete set when they come out, something I haven't done in a couple of years. Sure, I could buy a whole bunch of packs and build it myself but I'm saving that experience for something else. More on that later.

Anyway, after the "big game" on Sunday, I stopped by Walmart on the way home to pick up some essentials. As I mentioned in my other post, the Walmart is a little out of my way normally, though I think it is technically closer than the Target. I sneaked a peak at the card ailse on my way to the register and caved with a fat pack. At least I would get a Kris Bryant card that I knew wouldn't be coming with my team set.

However, the card right before the Bryant was this gem:


There a two types of short prints this year. The more common ones are the pregame, warmup type photos and the SSPs are players pointing. Although I haven't seen every card, I heard there is at least one pointer in the regular set (Troy Tulowitzki?) so it might get confusing.

I like that there's a theme to keep them consistant and I even like the pregame theme. This one, however, is a bit too zoomed in for my personal tastes, but I'll gladly add it to my collection. 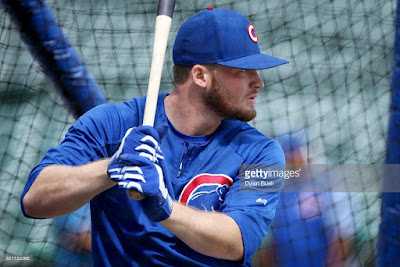 According to the Getty Images caption, Ian Happ is warming up before a game against the St. Louis Cardinals at Wrigley Field on June 21, 2017.

In the 6th inning, Happ would follow Kyle Schwarber's leadoff single with a single of his own, but the Cardinals got out of the inning without giving up a run. Happ would finish 1-4 with a strikeout. Holding a 3-2 lead, the Cubs bullpen would implode, giving up 9 runs in the 8th inning. Not pretty. 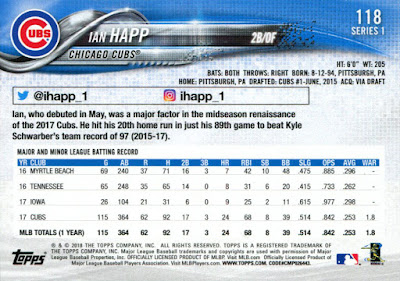 I think his regular base card is much better, a sliding catch with the Future Stars logo and All-Star Rookie Cup. I don't know all the details that goes into photo selection, but assuming all of the photos are equal in terms of Topps having access to any and all of them, I went back to Getty to do a little digging. And actually, there wasn't much in the way of alternate photos to use. A lot of the photos that came up were him doing pregame stretching and warmups in his full uniform, not the warmups that would have made the card easily distinguishable as a short print.

Maybe this one, with a little light alteration? 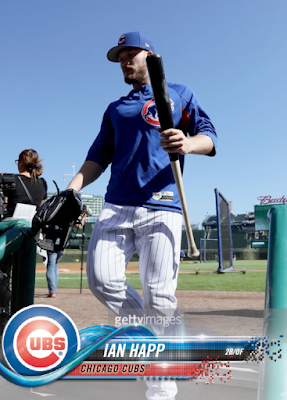 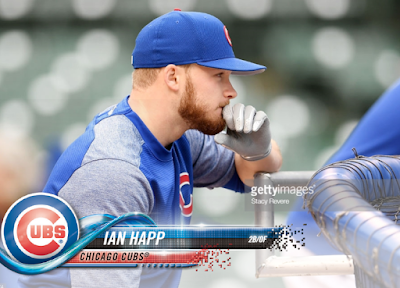 Topps has released their 2018 template as one of their custom designs so I whipped these up in about two minutes. I didn't have time to mess with lighting on the top one.