No, I don't mean starting or being part of a group interested in cardboard.

I'm talking about a piece of cardboard reminding you of something. Baseball cards connect us to a lot of personal experiences. I have a specific memory of going to a card show as a kid with my uncle who now lives on the other side of the country and haven't seen in 15+ years. I remember doing chores to get a couple of quarters for a pack of cards. Trading cards with friends, even it it meant giving up two or three just to get the one I needed/wanted at the time. Buying my first whole box of cards for the guaranteed autograph, only for it to be the worst possible card on the checklist.

But now I'm afraid I've gone too deep. Because now, I'm associating cards with other cards.

Yesterday's post is a great example. I showed off a Jedd Gyorko card because of the Cubs Cameos. While conducting research for the post, I connected the card to Ian Happ's MLB debut. And the way my brain works, that memory is now there and won't go away.

So anytime I see this Gyorko card... 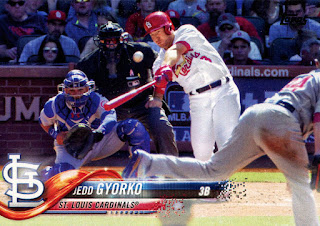 ...I'm going to think of Ian Happ and his debut.

But wait. I already have cards in my mind associated with Ian Happ's debut!

Happ earned a Topps Now card by homering in his MLB debut. He also showed up twice in 2017 Topps Update, including the above Rookie Debut card that is dated May 13, 2017. These fraternal twins now have a stepbrother. Half brother?

Three cards from three different sets are now connected in the deep recesses of my brain.

To be fair, I've done this before but two different players/teams/plays is what makes this different. Previously, the closest I had gotten were different angles/shots of the same play. Like the above Happs by themselves.

Or the 1989 Topps Team Leaders cards from White Sox and Mariners.

Or these Charles Johnson cards from 1999 Fleer Tradition and Stadium Club.

Same play at the plate with Jose Hernandez and Jeff Blauser in the background.

Anybody have any others that come to mind? Or connect cards with other cards for reasons only known to you?
Posted by Once a Cub at 10:00 AM