As I mentioned in yesterday's post, I stopped off on my way to work and picked up a hanger box of 2018 Topps. I waited until my lunch break to crack it open and posted some photos and thoughts on Twitter.

I heard some grumblings about the design the past few weeks and thought I was in the minority of those who liked it. But it seemed like a lot of people were excited to rip into it yesterday. One of the things that jumped out at me was a sharp uptick in the number of quality photographs used on these cards, today's card included.

My hanger box was a bit of a dud in terms of cards I'll keep for my collection but it was still an enjoyable experience. My only regret was picking up the Target version (Derek Jeter exclusive) as opposed to the Walmart one (Kris Bryant exclsuive). I knew about it, but Target was on my way to work and my Walmart is hit or miss with cards.

So two guaranteed Cubs cards would have been nice because it turns out there weren't any in the box I chose. And no Ivy cards. But I did manage to pull one card I'll be keeping for my burdgeoning Cubs Cameo collection. 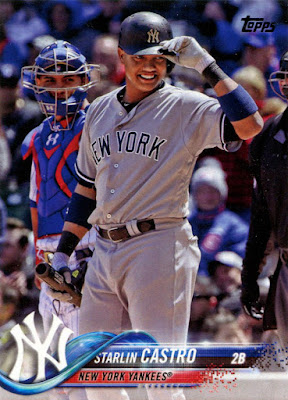 The Cubs traded Starlin Castro to the Yankees following the 2015 season and this was his first trip back to the North Side because the Cubs only play the Yankees every three years and at Wrigley Field every six. Castro appears to be tipping his cap to the Cubs dugout which is on the third base side at Wrigley.

It was nice that he was able to show that kind of respect to his former teammates. He had the terrible luck of being the face of some really terrible teams, only to be traded in the offseason right before the World Series drought ended.

But by Cubs cameo, I don't mean a former Cubs player. I'm talking about the lurking Cubs catcher, Willson Contreras on the left side of the card. Most of this little collection is dupicate Ivy cards that have sliding Cubs in double play situations, so this makes a fine addition. 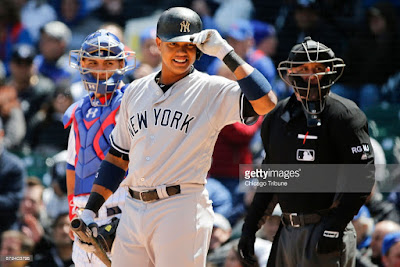 Here we have the source photo courtesy of Getty Images. According to the caption:

The New York Yankees' Starlin Castro gestures to the Chicago Cubs' dugout in his first bat appearance in the first inning at Wrigley Field in Chicago on Friday, May 5, 2017. The Yankees won, 3-2. (Jose M. Osorio/Chicago Tribune/TNS via Getty Images)

The Cubs played his old walk up music that got the crowd pumped. I found a nice little video from that moment:

And a video montage the Cubs played on the jumbotron to summarize his time in Chicago:

The only bad thing about this card is that the Yankees would win this game 3-2 on a 9th inning, 3-run home run off the bat of Brett Gardner. This feat earned Gardner a Topps Now card that sits in the Ivy collection. 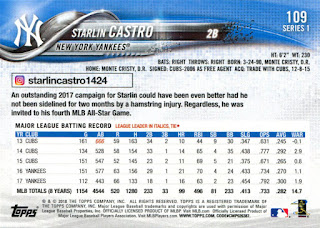 Here we are, one day into the baseball card season and I have a contender for one of my favorite non-Cubs cards of the year already in hand. This one will make my year end countdown, I'm sure.
Posted by Once a Cub at 10:00 AM