I have almost 500 cards in the Ivy collection and need to whittle down some of the numbers where I have duplicates for the Frankenset. I want to make sure each card gets its due so I've decided that over the course of a month or so, I will sprinkle in individual posts. When I have exhausted what I have for each binder page, I'll post which ones made the cut. Once I have a full page, I'll add a tab up top where you can view each page. I have multiple representatives for many of the first 99 numbers (11 full pages) which should get me through all of 2017.

We're nearly done with February and I still haven't shown off the first full page of the Ivy Frankenset. Let's speed things up a bit with card #7 and make it a two-fer. 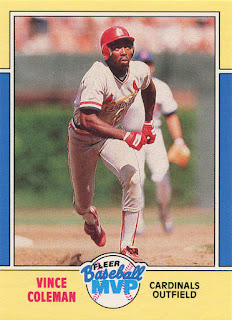 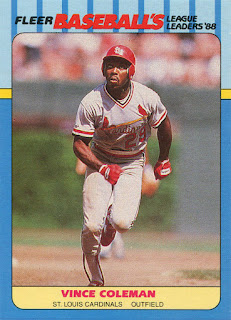 Both of these Vince Coleman cards were put out by Fleer in 1988. The card on the left was in the Fleer Baseball MVP set, while the one on the right was Fleer Baseball's League Leaders. Presumably, Coleman is included for Stolen Bases, where he led the league for his first six seasons.

The two card share a brand, player, location and even possibly the same play. My assumption is Coleman is on second base (nice Ryne Sandberg cameos) and on the move to third at the crack of the bat. Left card has him tracking the ball in the air over the infield. Right card is a step later and the ball is passing over his head into the outfield. For all I know, this is a foul ball and not real trackable, but I'm going to head over to Baseball Reference anyway and see what I can dig up.

Coleman played at Wrigley in two games in April, four games in June, and three games in September. In 1987, all games at Wrigley were day games, so that doesn't help much. The Ivy looks too green to be the early season April games but I took a look anyway.

In the 6th inning on April 7, 1987, the above happened. He was on base three times that day but this was the only plausible scenario.

Two days later on April 9, Coleman led off the 3rd inning with a walk and promptly stole 2nd and 3rd. Unless there was a left side foul ball in between stolen bases, probably not this one.

The exact same scenario to lead off the 7th inning. How good was Coleman on the base paths?! Four stolen bases in a game will get you a Topps Now card these days.

Fast forward to the June series and Coleman keeps getting on base. This time, on June 4, Coleman singled in the 5th inning. Like the previously two, unless there's a foul ball out of play, not likely. He also singled in the 7th but didn't make it to 2nd base.

On June 5th, Coleman singled, but didn't advance, and walked but went 1st to 3rd on an error.

In the June 6th game, Coleman again reached twice. On base machine. He walked but went 1st to 3rd again. He also singled in the 9th but was stranded at 1st.

The June 7th game got off to a rocky start when Coleman led off with a single followed by three straight walks before getting a sac fly for the first out. Coleman would single two mores times but go 1st to 3rd on an Ozzie Smith single, and 1st to home on a Smith triple.

He made it second but scored on a single to right field, not left a sit appears in the photo.

A walk to lead off the 8th left him stranded on 2nd.

September 26th has Coleman reached base three time. This is getting ridiculous!

A leadoff walk is erased when a Cubs catcher finally catches him stealing.

In the top of the 3rd, I have my best option thus far. On second base with a pop fly to left field. Two outs, so Coleman is on the move. Coleman would single again in the 5th but be the forceout at second on a groundball.

It wouldn't be Vince Coleman at Wrigley if he didn't get on base two more times in his final game at Wrigley that season.

On September 27th, Coleman again leading off the game on base. A single to left field moved Coleman from 2nd to 3rd but on the card, the ball would clearly be in the air.

His final time on base at Wrigley in 1987 puts him the possible situation yet again. However a single to right field makes it doubtful.

Assuming the flyball on the card in question is a fair ball, the choice really comes down to the Ozzie Smith fly ball in the first game or the Tommy Herr fly ball on September 26th. Because the Ivy in the background is full and green, I'm going with the Herr play.

Based on that one season at Wrigley, you'd have thought Coleman was a Hall of Fame player! As you can see above, while he did alright over the course of his career, that season was a bit of an anomaly. 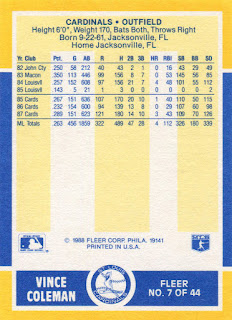 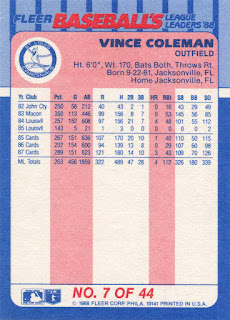