A Pair of New Kris Bryants from The Lost Collector

The chase for Series 1 is slowing down a bit. I've picked up most of the cards I wanted and now it's a waiting game for the others to come down to a more reasonable price level.

In the meantime, I'm trying to be more active in wheelin' and dealin' for needs/wants. If you missed my post yesterday, I have some Series 1 inserts (including about two dozen Toys R Us purple parallels) and base dupes available.

I've been reading The Lost Collector for years but I'm going to count this as a Twitter trade. I recently started following AJ on Twitter (@Lost_Collector) when I came back to blogging and that's where all of the communication for this happened.

On Saturday I received a two-card PWE from AJ (AKA The Lost Collector) and both cards were needs! These are my 93rd and 94th unique Cubs cards from just 2018 Topps Series One (a little overkill there, Topps?) 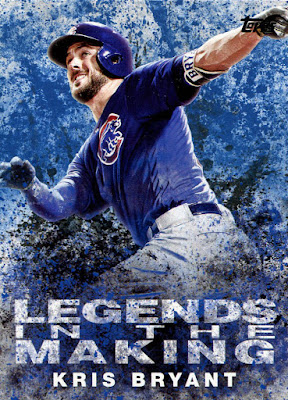 The Legends in the Making card is actually the blue parallel version of the base insert. Yes, parallels of inserts have been around a while, but that doesn't make it any less ridiculous. There is also a black version which I am still keeping an eye out for both Bryant and Anthony Rizzo.

Why is Kris Bryant a Legend in the Making? Aside from being the first player to be the College PLayer of the Year, Minor League Player of the Year, MLB NL Rookie of the Year and MLB NL Most Valuable PLayer in four consecutive years, here's what the back of the card has to say: 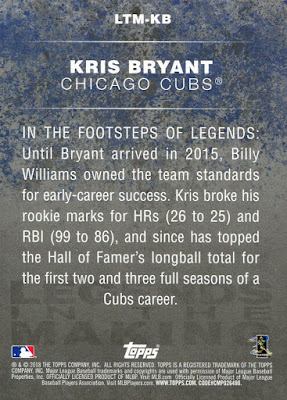 As for the other card, this one is a retail exclusive and since a lot of the sellers early on are hobby case breakers, is had evaded me until now. 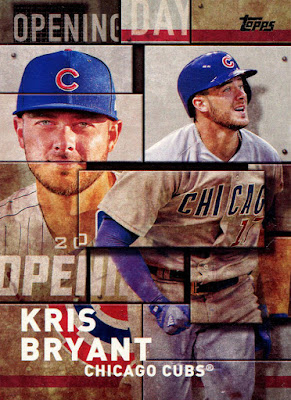 The decision to have an Opening Day insert set in the flagship product when you already have a full set called opening Day is a little puzzling. The set doesn't scream "Opening Day!" to me and aside from the quarter circle red, white and blue bunting behind his name and the words Opening Day, this could have been used as a different insert set. This actually feels like a Bunt insert to me, but what do I know. 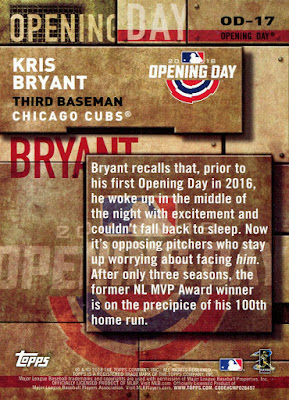 The back makes more references to Opening Day, but again, could have been used for something else. Despite that, I actually like the design, which doesn't happen very often with these heavily manipulated images.

Thanks AJ for the additions, I'll have some Yankees heading your way!

Counters on the right have been updated as well!
Posted by Once a Cub at 10:00 AM