In this weekly series, I show off two random Ryne Sandberg cards from my 600+ card PC. One will be from his playing days (pre-1998) and one since his retirement (1998-present).

This was another busy week of incoming 2018's so I didn't make much headway with adding older stuff to my cataloging efforts. At this rate, I might pass 100 cards from 2018 before the second set gets released!

I also added a fifth counter in the right sidebar. The second one down will be counting the cards added to my various collections in this calendar year. Early on this will mostly be 2018 cards, but when making a few eBay purchases, I've maximized shipping by picking up a few known older needs/wants from various sellers as well. A few trade packages have also added some older cards to my collection. In theory, the top two will reset at the end of the year and the bottom three will be running totals.

Anyway, on to the two random Rynos. 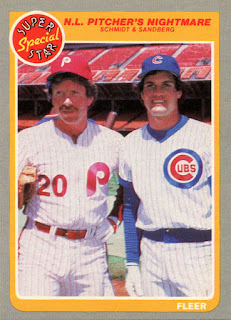 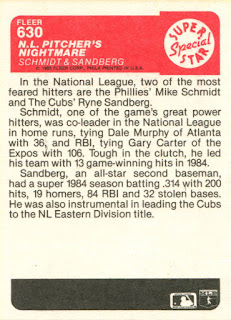 I don't have much to say about this base card out of 1985 Fleer. I liked these combo cards as a kid and was always confused as to why these subsets weren't "worth" as much as the cards of the stars' individual cards in the price guides. I mean, come on, this card had two stars!

Mike Schmidt is featured as one of the NL Pitcher's Nightmares due to his premiere power hitting. Ryne Sandberg was coming off his MVP season in 1984.

Schmidt is one of the few NL super stars that I have been unable to find on an Ivy card. My search methods aren't perfect or all encompassing but I've been usually able to track one down for most players. Any Mike Schmidt super collectors out there willing to look through their collection? 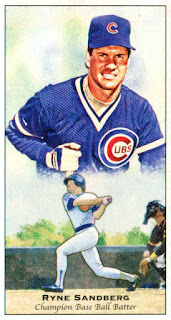 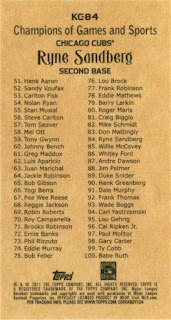 Ryno's post retirement card comes from an insert set out of 2011 Topps, a Kimball Champions of Games and Sports mini. This was a 100-card set which included three Cubs players. The other two were Ernie Banks and Starlin Castro.

The top photo on the card is one that Topps has used since, and probably before. If the bottom one has been used, I haven't seen it unless it was cropped tighter as it a fairly generic swinging batter. 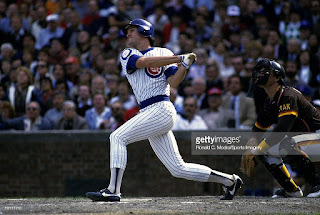 The artist rendering is taken from this source photo, a Sandberg at-bat in Game 2 of the 1984 NLCS. That would make the catcher Terry Kennedy of the San Diego Padres. Sandberg went 2-4 with an RBI in the game to help the Cubs go up two games to none. We all know what happened after that.
Posted by Once a Cub at 10:00 AM