Just a quick two-card post today to celebrate the holiday.

All politics aside, I have two cards featuring a president in my Cubs collection. Both feature Ronald Reagan and most likely come from the same moment, throwing out a first pitch at Wrigley Field in 1988. 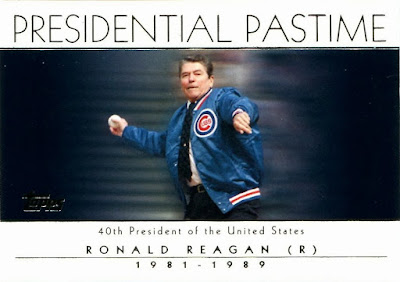 This horizontal card comes out of the 2004 Topps Presidential Pastime insert set. Each President up to that time had card in the set, ending with #43, W. The backs had blurbs that tried to connect the Presidents to the national pastime. Before acting and politics, Reagan was play-by-play recap broadcaster, meaning he would react to written out recaps as if he were watching the game live. 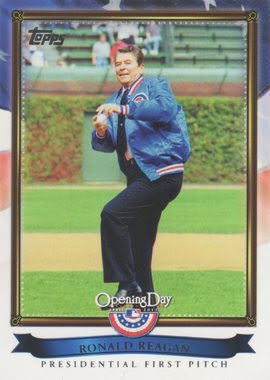 In 2011, Topps dipped into this well again with a 10-card insert set in their Opening Day line. This time, they featured Presidents who had actually thrown out a first pitch, hence the drop in numbers. Barack Obama and George W. Bush each had two cards in the set. Harry Truman, Calvin Coolidge, Richard Nixon, Woodrow Wilson and John F. Kennedy round out the set.
Posted by Once a Cub at 10:00 AM